I have written previously about Panic Disorder, which, for me, was the most extreme form of anxiety I have ever experienced. (https://wordpress.com/post/lwallin.wordpress.com/39) I hope none of you have to go through anything like it. It led me to investigate anxiety in depth, starting with a book called, The Anxiety Disease, by David Sheehan. It’s not high on the bestsellers list at Amazon, but it helped me come to terms with something that didn’t make any sense.

Last night, when I lay awake at midnight worrying about all the things I had to do, I realized my perfectionism was part of my problem. I had decided to have a party on Labor Day to dispel the loneliness that holidays usually bring me. I invited some neighbors and friends but realized I might not have planned my week so well. I have been sick for a week, so not much cleaning has occurred, but I have time. I also postponed a trip to see a friend until next week because of said sickness. This puts me out of town the weekend before the party. Third, I had decided to replace some carpeting in two bedrooms. The guy was going to come and measure it, which meant facing my propensity to accumulate and emptying out three closets. In addition, I wanted to enter poems into the Poets and Patrons Contest, and they are due Sunday. Finally, I wish to learn Spanish at our local community college and I can take it as a senior if I sign up within 3 days of the start of class, which was Monday. Yikes!

I worked myself into a “tizzy” as my mom used to say and had no idea when I would be able to calm down. Fortunately for me, I had paper and pencil handy. I decided to make a list of everything I had to do. While I was doing that, I also chose to write down my feelings when they cropped up, even if they had nothing to do with my list. There is was – my desire to do everything beautifully. I have a picture in my head of what I want things to look like: award-winning poems in the mail, closets free of clutter, perfectly clean house, including windows and deck, carpeting in place, relaxed visit with a dear friend, delicious food cooked on the grill on a sunny day, and me speaking Spanish to Pablo, who is Cuban.

My need to accumulate everything I have ever been interested in perturbs me, though. Really. I have more books than I can ever read and have taken to hiding them in the closets so I don’t look so crazy! Combined with my love of quilting, all of my bedrooms are almost full and I live alone. I have made progress in the last 2 years in finishing what we call UFOs (unfinished objects) and not buying more patterns or fabric, and I have changed from buying hard copy books to digital ones. What is hardest for me to understand, though, is why I can’t let go of these things. I’ve gotten good at throwing out old magazines because they are seldom pertinent to current times. But books and fabric… It is especially rewarding to go online, see the item someone else has recommended, pay for it, and then get a package in the mail!

So I spent some time trying to examine why I have this compulsive behavior. People have been giving me advice for decades (and no, I don’t need another suggestion for migraine cures either), and I have tried them all.

For a while, I thought it was a form of security from being raised in a home that could be unpredictable. Well, it’s not unpredictable now. I even read Overcoming Compulsive Hoarding when I found I had bought enough tea on sale for over a year.

A lot of my anxiety stems from being single at 70. I dread the coming of times when I won’t be able to get out of my house and may be bored. Right now I’m too busy to be bored, so why do I think I will get all these books read? (I read two a week, plus or minus) I could lose my eyesight tomorrow. Who will read them then?

But, of course, it’s also in the family. Which means I may have received a genetic predisposition and then observed the anxiety in my relatives. I distinctly remember the Cuban Missile Crisis because my mom was glued to the TV. The cure? There is none. Having a strong faith helps because I do believe God has got my back, but sparrows still fly into windows and selfish people like power. Meanwhile, I ask for help letting go of all the things my children won’t want to haul out of here, including some treasures like my dad’s war souvenirs.

This has been part of a bloghop given by Hoagies Gifted Education. you will find the other posts here: www.HoagiesGifted.org/blog_hop_perfectionism_ocd.htm 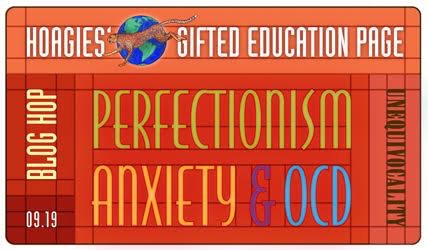 3 thoughts on “Perfectionism, Anxiety, and OCD”